I Choose the Sun: Ridgecrest 50k

On Thursday I decided that I’d head out to the high desert for one more race this year. Mainly because it was much better than just sitting at home. You see, everyone else was up at the North Face Endurance Challenge, but for personal reasons I had elected to stay back. I felt like everyone else was at the biggest party of the year and I was freaking grounded. Only then I realized I wasn’t grounded and there was another more low key house party going on and that I should probably go. Besides, acoustic guitars and cans of PBR are way more my style than champagne and tuxes.

Then, on Friday I decided I wasn’t mentally capable of racing and tried to back out. But Gabi fed me beers and talked me back into it. Sneaky Gabi. So when I finally woke up on Saturday, I realized I needed to pack a bag and get the hell out of town. Unfortunately my morning was spent fielding phone calls and texts from racers, crews, spectators and mothers (everyone always seems to think I have answers), monitoring the action at NF via tracking, twitter, facebook (I had like 50 windows open) and watching the Western States lottery feed, praying that I wouldn’t get in and I would get $370 back on my debit card to use on Angeles Crest instead. I was like information central. It was all quite ridiculous.

FINALLY, I closed down shop, showered, threw my Saucony stuff in a bag and headed down to meet Gabi and drive out to Ridgecrest. I guess I was really going at this point. I’d done this drive many times this year heading out to Death Valley, and I’ve got to say – it felt nice heading out there to run myself. I was immediately glad I decided to go.

The day and night were totally relaxed and I woke up on Sunday totally excited. Not to race… but just to run. I could not wait to get out there and run 31 miles. I couldn’t think of anything that sounded more fun. That was a good sign.

A record number of entrants gathered in a big parking lot, the RD shouted instructions into a little plastic megaphone and finally shouted “Go!” And so we went. I felt no nerves. I felt no need to race. Today, I was just going running.

I felt as if I was floating along at about 8:30-9min pace, which seemed right, so I just locked in and allowed myself to pass and be passed without any regard for who they were or where I was. I quickly reached the 5.5 mile mark, key word being quickly, as I realized I was actually running under 8 minute miles. This seemed like a remarkably bad idea, seeing as though I wanted to enjoy this day and my knee was laden with tendonitis, so I tried to slow down a bit. Apparently that didn’t happen because at the 11 mile mark I was still running sub-8s. And I felt awesome. But I freaked out. I didn’t think I was capable of maintaining this pace, especially now that my legs were beginning to feel the climbs a bit. So I did finally slow down a little. 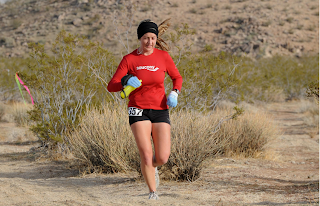 When I run 100 miles, or even sometimes a long, hard 50 – I expect to go through quite the range of emotions. Highs and lows, ebbs and flows. I look forward to this greatly. However, for the past six months I have been remarkably numb and felt nothing. During a 50k, I expect just to focus on the race… it will start to hurt a little… and then before I know it, it will be over. There are no tears in 50ks.

What happened next was entirely unexpected. The flame went out. I felt dead inside. I didn't care about anything at all. Nothing mattered. Whoa.

Accordingly, I was momentarily left with a feeling of complete and utter sadness and I feared that my day would end here on account of the burden. But surprisingly, something completely different occurred. Instead, I felt weightless. I felt the extreme happiness that I hadn’t touched for so long and I took flight down the trail.

The sun was shining through the clouds illuminating the desert floor and bouncing off of the large boulders scattered throughout my view. I felt the warmth on my face. I felt the wind in my hair. I felt alive. It was, as I like to say, the jam. 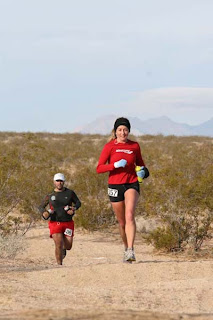 Running along, at mile something.

At about the halfway point, I began to feel the climbs a bit and backed off the pace, resolved to finish strong. I drank, I ate, I salted, I ran. That’s all there was. As I reached the marathon point, I laughed a bit at the realization that just a very few years ago I dreamed of the day I would break 4 hours and maybe even qualify for the Boston Marathon. Now here I was handily running under 4 for a split in a longer race, and I felt like I had been totally dogging it for the past 10 or so miles. Wow. You know, I spend so much time hating myself for what I haven’t yet accomplished that sometimes I fail to see progress. Today, that was not the case.

Next, I did the only logical thing I could think of – run the last five miles as hard as I could until I felt like I would throw up. This proved to be great fun. And very confusing for the 10 or so runners that I passed. I crossed the line at 4:41:21, setting a PR by well over an hour. This is the second December in a row that I’ve gone to a race I wasn’t really stoked about running, with tendonitis in my right knee and not that great of an attitude – yet totally killed it.* My theory is that end of the year races are the one place that I really, truly have no expectations – so I’m finally free from the burden of my arguably destructive mind. Man, I need to work on that.

*I say this in terms relative to me. Not by industry standard. Yet. 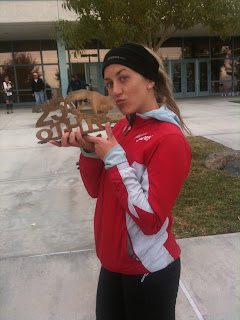 And work on it I shall. 2011 is bringing me the Boston Marathon (what?! Yes.) and Angeles Crest 100 as goal races. Hopefully the lottery gods will allow me back into Miwok 100k to redeem myself as well. Until then, I have day after day of double workouts and long weekends climbing big mountains ahead of me. 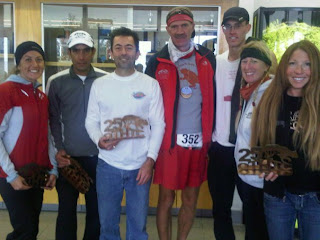 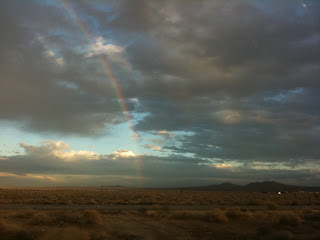 "Mama you can choose the rain, but I choose the sun." ~Nikka Costa
Posted by katie at 7:00 AM