What I Learned From Getting Shanked in Prison

...the prison of my mind.
When I was young, I’d often accompany my dad on trips to the grocery store, mainly because I was completely irascible and literally could not stand being confined to rooms and chairs and things of that nature.  Unsurprisingly, my mom would always suggest that I buy some patience while I was there.  My over active body fostered an over active imagination, and I had myself thoroughly convinced that this product was conveniently located near the Kraft American Singles in the refrigerated aisle of my local Dierberg’s.  I guess that shit can spoil.
Now grown and firmly rooted in Southern California, I’ve found myself in the market for some good patience as of late.  Why, you say?  Well, because I am injured, and the only cure happens to be time. Unfortunately, I just can’t seem to find any patience.  I guess they don’t carry it at Ralph’s.
So first thing’s first:  how did I injure myself?  Well, it’s pretty typical actually.  I was viciously stabbed several times in the left knee.  By a yucca.  I can’t make these things up.  So, this apparently severely damaged the tissue around the puncture, as well as lacerated and bled out a bursa.  The result is a knee that cannot bend and me walking around with a cane.  I even stumped three doctors.  It’s all very House. 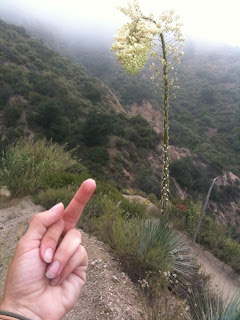 Gangster.
Next thing:  where in the hell did you do that?  The answer would be down in the treacherous depths of Vincent Gulch.  If you’ve never heard of that, good.  Stay on the AC course and do not follow Sean O’Brien and his maps from 1950.  Ah, I’m just kidding, Sean’s runs are always an adventure… but on this particular run, that adventure turned into a 12 hour, 40 mile bushwacking extravaganza that left me hobbling, shivering and climbing in the dark; muttering “I swear I’m still having fun!” under my breath and in between yelps of excrutiating pain.
Finally:  why did you jump into a yucca?  Those things are sharp!  OK, smartass – I know they are.  And I didn’t jump into it.  I fell while half climbing over a log/half balancing on a rock to avoid a mass of stinging nettle on one side and poison oak on the other.  Welcome to Vincent Gulch.
I guess the other thing you may have been wondering is where the world I have been?  No blogs for months, lots of changes and multiple races…. yet nothing to say, not even a race report.  Well that’s not exactly true – it’s more like I haven’t had a lick of time to write due to taking on some extra freelance work as well as kicking my training into a seriously high gear.*  I’ve been putting in some really stellar weeks as of late and have also begun taking hot ballet three days a week for cross-training (cardio ballet in a hot yoga room), which has been wildly successful for my core strength and flexibility.  Plus I love it.  More on that later though.
* I’m only writing now because I’m injured and having nothing else to do. 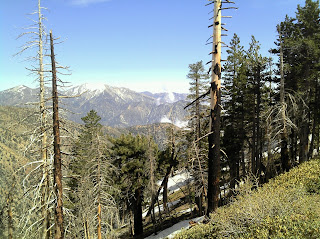 I am either working or I am here and have no cell service.  Now you know.
So the point is that my training has been going really well.  The crux of this, which I would have written about but didn’t have time, was two weekends ago when the Memorial Day holiday afforded me the time both to reflect on my gratitude for our troops and for an extra session of beating myself up in the San Gabriels.  The weekend started scarily, with a 24 mile run that reeked of exhaustion from the Bishop High Sierra 50 miler which I had run just 6 days prior.  However, the succeeding day, I completed 34 miles with little to no trouble and ended feeling pretty much amazing.  For my final performance I went and ran another 27, in the middle of which I threw in a surprisingly fast climb over Williamson that even had Dom saying, “Damn.”  Then I suffered through Cooper Canyon and brought it home for an 85 mile weekend that shifted my perspective in a major way.  I was no longer afraid of Angeles Crest. 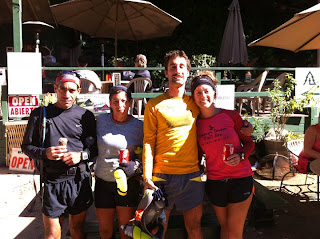 Stellar Crew of accomplices to said training block.
Coming off of Memorial weekend, I continued to push myself hard and reveled in how wonderfully my body was responding.  Nothing hurt.  Nothing ached.  Nothing nagged.  And I just kept pushing harder and harder.  I knew I could make it through another 3-4 weeks of exhausting days and I’d have truly given my all in this training block.
You see, that’s why this whole yucca shanking was an exercise in really bad timing.  Because I haven’t been able to run for 10 days and that isn’t exactly working towards the aforementioned plan. Now, all things considered, it IS getting better.   I couldn’t walk without a cane for 4 days, then I still couldn’t walk well for two more.  Now I can walk normally, I’ve taken two ballet classes (albeit with some extremely lackluster plies) and as of today, I can walk down stairs!  The question is, will it completely heal soon enough and how much fitness have I lost?
Last Thursday, the doc said it could be another week or two, or even more.  After that, I broke down and cried and was in an altogether shitty state of things for the last couple days, especially the weekend.  I’m talking full on temper tantrum mode, back from the Kraft Singles days.  I’ve tried to look at the positives here:  hey, there’s no ligament or musculature damage!  Hey, I don’t even have to do anything and my amazing body is just going to heal itself!  Hey, there’s not likely going to be any lasting effects from the attack!  Yes, well I can’t run and it’s completely absurd that a plant has interrupted my training.  And so I wrath. 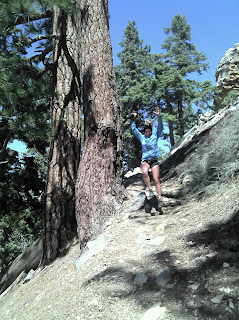 Needless to say, I can't exactly do this right now.
In the midst of this minor setback deemed national tragedy in my head, my incredibly thoughtful and supportive bf/bff has had to put up with an awful lot, yet he has been awfully wonderful to me.  Between driving up from the OC for multiple visits (perhaps to make sure I wasn’t breaking shit?) and not leaving me on a curb somewhere as I spent my weekend pouting that everyone else got to run and not me! – he’s been a real ace, let me tell you what.  In the midst of this raging, he also sent me a song which I’ve loved for a while but completely forgotten about.  I love the dude’s voice and the rolling melody, but what I really latch onto is the lyrics, namely this part:
We can shape, but can’t control these possibilities to grow
Weeds amongst the push and pull, waiting on the wind to take us…
"We Will All Be Changed" ~Seryn
Hmmm… yes.  Maybe we all just need to settle down here.  And by “we all,” I mean “me and all the crazy voices in my head.”  This situation is out of my control and I can’t decide that it’s necessarily going to turn out terribly with regards to AC or even my life in general.  I don’t get to make that choice.  But still, I never thought of myself as someone who would be lost without my running, and yet that is exactly how I feel.  Why am I acting like such a crazy person?
This got me thinking… I’ve had the chance to train with and therefore engage in lengthy conversation with many amazing runners, who also happen to be amazing people.  While out on a 30-40 mile run, there is room for many topics, to say the least, but I’ve noticed a common thread that binds us all.  We all seem to be in a constant battle of control and trying to accept that we can't control.... whether we want to admit it or not.  On one hand, we universally understand that we can't control the weather, the competition or even what happens on any given day.  Some days and some races are great for no reason; while others involve puking, bonking, a trip and fall or just altogether not going well.
But through all this, we still have the control to go out and push ourselves each day.  Body and mind willing, we can test our endurance for that extra mile, stretch beyond our capabilities and drop the pace for a few minutes, charge one more mountain, all to give ourselves the best chance to be great come race day.  To go in with no regrets and confidence in the work we put in.  Or at least we think we do...
It's a fine line we run (and sometimes power-hike) between pushing ourselves to new heights or pushing a little too far, winding up injured.  When we do this, we know the line we've crossed, and soon we go back to the drawing board to try and see how far we can get next time.  While this is frustrating when we're dealing with these issues (tendonitis, IT band stuff, calf strains, pulling a hammy, etc.), we know we did it to ourselves.  We took it a little too far, and though we don't want to admit it, we broke.  We're still in “control,” though.
What I never considered was that something else could cause me to be unable to run.  Falling down the stairs, a car accident, fuck, a meteor or rogue piece of an airplane could fall on my head (that's actually an unrealistic paranoia of mine).... things happen.  I should know, as I was once sidelined for a year from a car accident that tore my illiopsoas.  It was entirely plausible that something completely ridiculous could happen and take that ability to push myself, to train for my goal, away.  And it did.
I've been unable to handle that, because I've been unable to let go of this control I've had over my body and my training and the extreme high I get off of surprising myself with a particularly high mileage weekend or a great split over Williamson.  Breakthroughs as a result of hard work.  And now theres a breakdown as a result of nothing.  It just happened.  It just was.  Goddamn yucca.
So I guess what I’m trying to say is that I get it.... I am waiting for the wind to take me, because that is all I can do.  And in the meantime, I can focus on improving my ability to handle and maintain happiness through setbacks like these.  As much as I want to believe it sometimes, running is not all there is, and I still have the responsibility and desire to be the best person I can be with regards to my character and interpersonal relationships. I was a real bear this weekend, and I have no right to bring the energy down just because I am mad at a particularly spiny piece of foliage.  Do I wish this on anyone?  Well….. there’s this one bi –  No, for real.  I don’t.  Accordingly, I need to stop making it other people’s problem, especially the one who I know would do anything to make it go away if he could.  So that is what I will focus on training right now.
Even if I have to sit still, I don't have to be still. 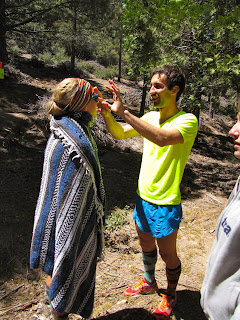 What will emerge post-shanking?  Only time will tell...
Posted by katie at 5:00 PM