I am not even sore! Okay. Yes. Yes, I am reasonably* sore. For recovery day, I think it is a brilliant idea to do this. I do not realize that when a hike is listed as being a crowning achievement for avid hikers, that means it is probably difficult. Like, REAL fucking difficult. So when you ask me if I want to hike half dome the day after running a 34 mile race, I will say no.
*very
I want to RUN that shit. 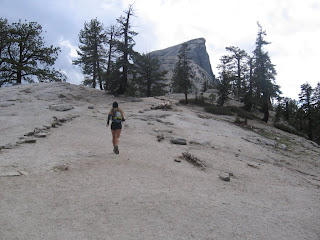 I mean really, it is just more efficient. The 17 mile trek is supposed to take 10-12 hours. 10-12 hours?! And only covering 17 miles?!! Screw that noise. We did it in about 7.5 and that included a 45 minute storm break at the base of half dome and a good half hour chilling at the summit. It was the jam. I'm going to attempt a recap, but even with my supreme wordsmithing abilities and excellent photography on the shittiest digital camera ever, justice could never be served to the grandiose of all that is Yosemite. Seriously. You had to be there. But you weren't, so I will try...
We had about a 90 minute drive to Yosemite Valley (in the RIGHT direction, thank you) that was largely filled with me looking at a sparkly river and singing The Fray at the top of my lungs out the window. I feel confident that this was appreciated by both Dom and the squirrels. We parked at Happy Isles, loaded our gear (completely self-sufficient - nowhere to refill) and headed out to hit the trailhead. Of course, we got lost in the first half mile and ended up running a loop around some nature trail shit. Whatever. I AM IN THE MOST BEAUTIFUL PLACE EVER! HOLY AWESOME!!!!!!!!!!!!! 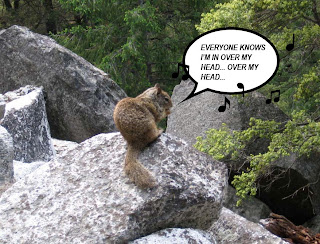 This guy LOVES it.
Once order was restored, we decided to head up the Mist Trail to Vernal Falls. Now, when they say "mist" they mean "millions of large ass drops of water that soak you to the core." Just an FYI. Here's me at the top, looking like I'm in a Bob Ross original... 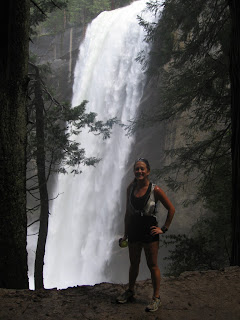 We're going to use a fan brush, and put down a happy little tree here. That'll be our little secret.
After that, things got steep. We passed a bunch of people that told us we were crazy for running, a broken man getting carried out on horseback and numerous dudes very obviously looking at my boobs, which I now realize were put on a nice little display by the chest strap of my hydration pack. There were these things too: 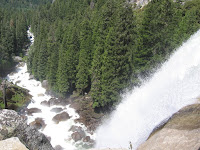 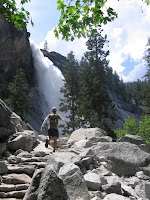 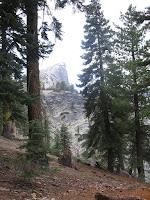 Pretty awesome, right? I know. So then, we get all the way up to the base of half dome and just as we begin the long ascent up to the saddle the sky decides to get all ominous again. Look to the left: black ass clouds. Look to the right: black ass clouds. Look straight ahead: black ass clouds. Basically, three storm cells were converging upon us right as we were preparing to grab hold of metal cables and climb up a giant exposed rock. No one that we passed hiking down thinks this is a good idea. This website does not think this is a good idea. (Scroll down to the part where it says NEVER HIKE HALFDOME IN A THUNDER STORM preceded by an unnecessary animated graphic). One man and his son in particular do not think this is a good idea at ALL. Said man went so far as to tell us we would, in fact, die should we choose to continue to the top. Well, OK then. We choose life and head back down to the forest to try and wait it out with a few other groups. After about 15 minutes of this, everyone else left, concerned about getting back to the valley before dark. Again, normal people would have said, "Oh hey. Everyone else is heading back down. We probably should go too." But as previously indicated, we are not normal. We are ultrarunners and we very logically reasoned that if we ran pretty legit on the way down we could wait awhile longer and still make the climb. So in the meantime, we hung out with this weird bird thing that was looking for some weird bird thing ass: 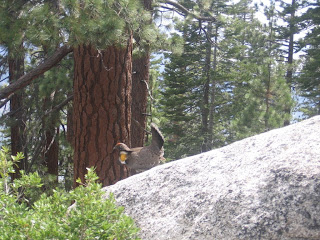 NOTE: I googled the shit out of this bird/bird-type item and can't find any indication that this thing is real. Therefore, I am only left to conclude that I have either a) founded a new Ornithological species; or b) seen a fucking dinosaur.
Eventually, we reasoned/convinced ourselves that the storms were passing and that we should head back up to the saddle. So we hit the steps for round 2. At the base, we had to make a choice. Of course that choice was GLOVE IT UP. 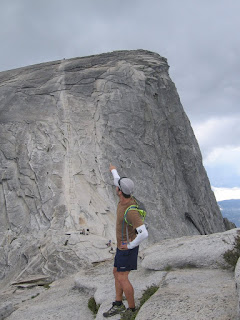 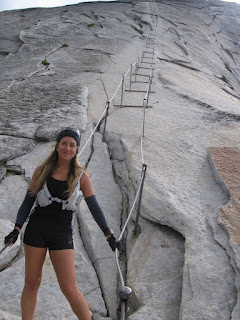 Now here's the thing about climbing halfdome when everyone else has left. Um, there are no people. First of all, this is awesome. Second, it provides a great challenge should you choose to look down while you are halfway up a 400ft nearly vertical rock. At this point you will realize that the only thing standing between you and imminent death is 8,000 feet of fall time to think about it. This guy knows all about that. He went up 2 weeks after us.
If you just clicked on that link, you're probably thinking, "WHAT?!!! Why the hell would you want to climb that shit?" Well, here's why... 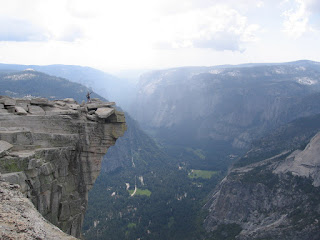 And if that's not enough, let me add that there was snow involved... 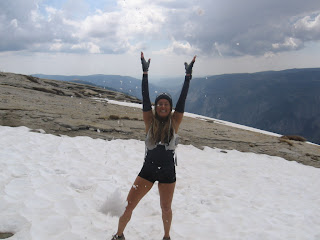 The good news is that it started misting again on the way back down a giant slab of rock. And the better news is that my 2140's were AWESOME for gripping a slippery, dangerous surface. Moral of the story: I didn't die, so let's just leave it at that.
After the amazingness that was halfdome, we started running pretty hard. This was pretty great because we had both previously expressed the need to work on our technical downhill running and now we had over 8,000 feet in which to practice. While exhausted. This obviously turned into some parkour shit, which was enjoyed by both hikers and deer. 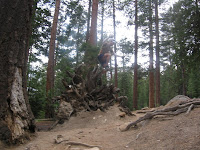 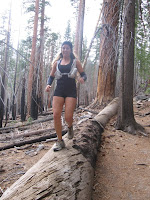 We took the John Muir trail back down - a little longer, but with different views and more runnable. (sans slippery death steps) We got to run under a waterfall and that was pretty fucking cool. I took this shot as the sun began to set and it's one of my all time faves from the crap camera: 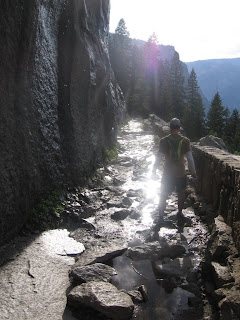 We ran legit all the way to the end, blowing past lots of folks that thought we were nuts-o for our skills over the rocky terrain. Funny thing is all I could think was: there are people that do much crazier shit than this. This is nothing.
Although I digress, it definitely was something.
It was AWESOME. 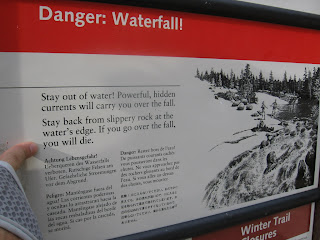 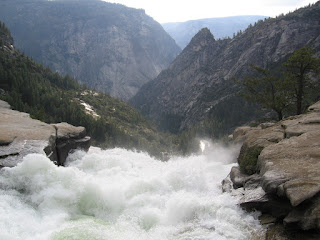 Said imminent death.
And the best part is that the amazing and challenging weekend was capped with this view, set with some nice and wildly appropriate Coldplay in the background. Talk about epic. 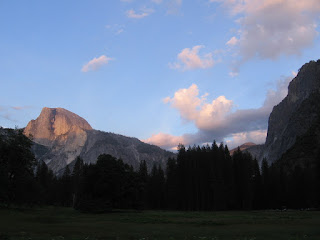