Things my mom would tell me not to do...

On Saturday morning, I got into a car with a complete stranger and drove 6.5 hours to a remote desert in Arizona to run all night on the Javelina course. Now, I realize how this may sound but seriously, do you think I didn't complete a facebook check? Friends with two of my friends = legit. Plus, it pretty much takes all your crazy to want to run 100 miles in a desert, so there's no reserves left for things like axe murdering, kidnapping, et. al.
Guys, excellent decisions are my forté.
I started running at 6pm after eating fresh, and figured I'd do 2 or 3 loops. Yes, I tried to go the wrong way two times on a trail that is impossible to get lost on. THERE IS ONE TRAIL. FOLLOW IT. I just really wanted to get extra soft sand running in and get cut to shit by some desert shrubs. Whatever, check this out: 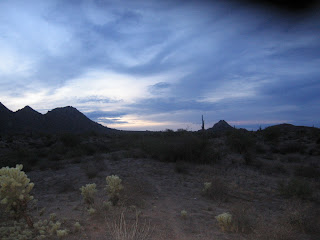 Now you want to come run in a desert don't you?
I figured each 15.5 mile loop would take me about 3.5-4 hours. I was wrong. I came rolling back to the Jeadquarters at 2:40. I chilled for a bit, ate some things and took off counter-clockwise. I did not, however, refill my pack with delicious and refreshing H2O. This was particularly great when, 6 miles into the loop, I grabbed the tube and nothing came out. Bone. Dry. However, I reasoned that I could run 9.5 miles with no water so I kept pressing forward. No water meant no salt pills and not much food, so my left calf decided to start cramping like a bitch. It hurt much worse to walk... plus walking means more time until I get water, so I ran it in for a 50k right under 6 hours.
Well, shit - now I HAVE to run another loop. The night's only half over. At this rate I'm going to have to run two more loops and I don't see ANY reason to run 62 miles tonight. So I took about a 10 minute break to rehydrate, switch shoes, Golden Sunshine my calf up, get Golden Sunshine in my eyes, drink some Mountain Dew AND REFILL MY PACK. Then I started running clockwise again. Loop, loop, loop it up!
It was past midnight at this point, and that meant that it was way past my bedtime. I know, I know, I am the coolest. Accordingly, I got pretty sleepy and though my body felt alright I actually began resting my eyes a little while running. Fortunately, where the Mountain Dew failed me, extreme jelly beans did not. I only bought them because they said EXTREME! but now I understand. Holy shit.
I passed people coming in from loop 2 sporadically for about 5 miles... and then there was nothing. Here is where the realizations started happening:
#1. I am out in the middle of nowhere completely alone. If I take a wrong turn, I am feasibly going to die out here. I am bizarrely okay with this.
#2. Why the hell am I doing this? No seriously... why am I out here? Why am I running? Why do I feel compelled to do things like this? It makes no sense.
#3. This is some Mothman Prophecies shit.
#4. This definitely calls for some Pink Floyd.
#5. This one's good. Now, I was used to seeing about 4 or 5 people begin to pass me in the opposite direction as I got closer to the Jeadquarters. This was not happening. I got within 2 miles and legitimately started to freak out that everyone was gone. My only logical reasoning was that a crazy serial killer had descended upon the aid station, brutally murdering everyone there and everyone who came running in. I decided that I would approach carefully and quietly until I could discern that there were live people that weren't murderers at base camp. Messed up, right?
I learned back at camp that a) there were no crazed killers; and b) pretty much everyone had stopped at loop 2. I considered running another lap for about 2 seconds but chose a fig newton and a chair when I found out NO ONE was running a fourth and that the race directors were playing Bags. Then I was informed there was a shower and yes, yes, I was done. I had to wait for said shower, so I laid down on the ground and played with desert mice. I tried to feed them a cola gel blast but they weren't having it.
All said and done, we got in the car around 4:45am and headed back to LA. In a subsequent email between my girl Kate and the RD, it was noted how crazy I was for driving that far immediately after running 47 miles overnight. I find this hilarious because had I continued to run for 6.5 hours, no one would have said a thing. But DRIVING 6.5 hours??? That shit is INSANE!
Now, without further adeiu, I present to you my full-on course report. This is for all my homegirls and homies running the race and anyone else who's curious about the Javelina. Check it: 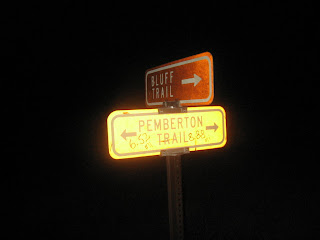 That's it people. One trail. Pemberton. Fîn.
First of all, the course is 100% runnable. I would liken the loop to Sullivan Canyon - very gradual up then gradual down. The "hilly" section begins about 5 miles into the clockwise loop and lasts for about 5 miles. It's basically a bunch of undulating small rollers that I actually found nice. I would not define anything on this course as a "climb."

This puppy shows 3 loops: clockwise, counter-clockwise, clockwise again. Alternately, it looks like the back of a Stegosaurus.
The long dark lines across the course are not shadows, but rather slabs of wood. It took me roughly 7 hours and 30 toe stubs to realize this. Actually, the wood is a good way to make sure you didn't veer off the trail....
Speaking of which, you will not get lost. I mean, I definitely tried to twice on my first loop but I figured some shit out. There is really only one deep sandy wash and that's towards the beginning of the clockwise loop. From then on, you only cross the washes - if you find yourself in a mass of soft sand for more than 2 or 3 steps, you probably went the wrong way. Bushwhacking through spiny shrubbery will also be a good indicator.
Which brings me to my next point: for the love of god, stay to the middle of the trail. There are spiny ass bushes on the sides and they will tear your shit up. My legs are a mess. Some of these spinies are poisonous , so I'm told, and if they barb you and stay in your skin; you may end up with goiter-hand. It happened to Ted.
Javelinas are real, and not just mythical cartoon characters. I saw one and I was not impressed.
The trail is not technical and there are few rocks. I only stumbled like 2 or 20 times. There is one downhill section when you are coming counterclockwise that's kind of rocky (i.e. the best part) but other than that you don't need much fancy footwork.
Shoes: I tried 2 laps in trails, 1 in road. Verdict: it doesn't matter. The road shoes felt nice, just because it was a fresh pair of kicks. My Xodus (Xodi?) are super light for trail shoes so I didn't notice much of a difference. I would say just go as light as possible.
You are going to drink a lot more water, et. al. than you think. It is dry as fuck out there and even at night I was going through almost 2 full liters per 15.5 mile lap.
If you haven't tried the new Sport Beans EXTREME!, they are the jam. Caffeinated jelly beans? Say no more... I am in.
If you are worried about the loop situation being boring, let me put your mind at ease. It would not matter if it was point-to-point or 100 loops - it all looks the same anyway, so I would suggest just developing a love for cacti and dry brush over the next month and a half.
If you prefer trees, you are going to be horribly disappointed. Sorry. It is a fucking desert, remember?? Accordingly there are no shade providers and I imagine it will be hot as balls out there in the middle of the afternoon. I wonder if "naked" counts as a legitimate costume?
I didn't use a light at all. This is partially because my flashlight fell out of my pack and is now lost, and also because I didn't need it. Once the moon came up, I was golden and actually surprised to see so many people with headlamps. There's an hour or so period when the moon is coming up from behind the mountains (the ones you don't get to run up) that it's pretty dark and you might want a light. I just bummed off some guy instead.
All and all, this is going to be a very fast course. With our AC training, team Coyote should dominate this shit. The biggest problem is going to be not going out too fast (Do I need to mention names here?) and remembering to stay conservative throughout the heat of the day. The course won't make you walk, so you've got to make yourself.
I plan to follow my own advice... that is, unless someone tries to lap me. Then I'll just run until I puke. And then I'll run/puke until I keel over and die.
Oh, and here's this, in case you want to size up your competition.
Posted by katie at 9:02 PM