This song has been my official jam of 2011. Hence forward, you can now refer to me as "Bandida."

First of all, here’s an opposite of change:

I’m excited and honored to be running for Saucony again in 2011, to stain a fresh set of their great apparel with mud, rip a few more pair of ignite shorts and tear the shit out of at least two pairs of Peregrines. Seriously though, I’ll only run for a company I believe in that makes shoes and clothes that are the best I can get. Being a company dedicated solely to running , Saucony is always on the forefront of the latest technologies and delivering competitive runners exactly what they need. Case in point: their expanding minimalist line, which includes my shoe picks for the year – the Peregrine (trail), the Kinvara (road) and the Hattori (training). Basically, they know what’s up and I can get behind that.

Loyal to the sport, indeed.

Now, here are the official 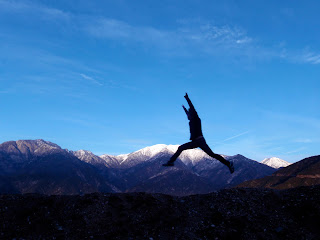 A grande jete into my training. (Baldy proving grounds in the background)

This year, I’ve vowed to focus not only on my training, but also taking better care of myself and being safer in the process. How?

1. I got a Goretex Paclite shell to keep me warm and dry in adverse conditions. I have gone hypothermic TWICE now in a race. My stubbornness says I don’t need special, $200 gear. My body says otherwise. Luckily, Santa also thinks I should be warm.

2. I bought a pair of polarized sunglasses and wear them when it’s really bright to protect my light blue eyes. I started getting freaked out that after long days of running, sometimes my vision was really blurry. I don’t feel like going blind any time soon, so ole ‘coon eyes mcgee it is.

3. I ALWAYS put sunscreen on at least my face, or at least wear a hat. I do not want skin cancer and/or to look like leather when I’m 32. Even though I never burn, I understand this is necessary and I was being foolish for never applying. I even took it one step further and bought a daily moisturizer with SPF after I started noticing signs of wear and tear on my 27-year-old face.

4. I at least have the idea to text someone where/what I’m running, since during the week I pretty much always hit the trails alone, in the dark. This necessity was reinforced after viewing 127 Hours. I have yet to put it into practice, but I’m planning on it.

5. Probably the biggest change I’m making is taking better care of myself on the mental level as well. I’m learning to recognize paths of thinking that are destructive to me, my relationships with others and prevent me from reaching my full potential both as an athlete and as a person. And I’m committed to doing things differently. 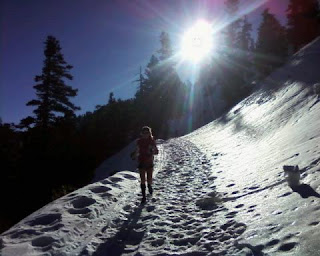 I know. I know. It’s only been a month. But I swear I’ve already noticed some differences! Maybe it’s just that I’m so damn excited to be back into training and working towards a challenging goal. Or maybe it’s that nice rest I gave myself at the end of 2010 that after 2 years, finally got me back to 100%. Whatever it is, these are the facts:

I’ve run at least once every day since a random Tuesday of last year – a longer stretch than I’ve had in years, maybe even since high school cross-country. Not because I’m obsessed with running every day, but because I can and I don’t yet feel like I need a break. Mark my word, I will take a day when I need one. Hell, I’ll take two if I need two. But the point is, my body is sustaining the mileage and I feel good.

For the first time since my senior year of high school, I have a really healthy relationship with food. Whether it was struggling with my changing body as a distance runner, or feeling the pressure to look perfect in a shiny, barely there uniform as a professional dancer – to be honest, I’ve always had issues with how to eat… or not eat. Now it’s all coming together – I listen to what my body needs, I have the means to purchase those things, and I eat and drink what I’m calling for. Including meat. Including greens. And guess what… including sugar.* I’ve always eaten generally “healthy,” but I’m not depriving myself of anything anymore. (Only the things that make me feel crappy, which ironically are fast foods and anything over-processed.) And it’s working… I have energy, I feel great and my body’s leaning out nicely. I can see and feel a major difference.

*And definitely including beer. 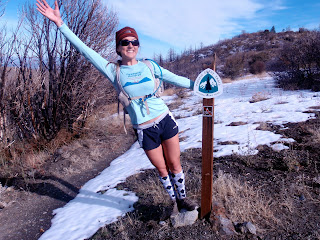 I started the year with the goal of sticking to no more than 70-80 miles a week with minimal twice-a-days, in order to really give my body a chance to adjust to the high mileage. For the most part, I stuck to the plan (sans one week where I ran 90, but that was MLK’s fault) and felt good. What I am most pleased by is my ability to put in some solid climbing at elevation back-to-back most every weekend. I work on keeping a sustained pace and have really surprised myself at being able to run uphill for 2-3 hours without stopping. It’s weird. And I like it.

Here are the numbers for the first month of the year:

*The number I am really happy about here is the amount of ascent, a great chunk of which has been spent at elevation. I had one week in there with over 17k of climbing which is close to where I'd like to be this spring relative to my goals and my body.

Heading into February, I’ve definitely started to notice the miles a little. My long runs on the weekend are great, after I warm up, but anything less than 7 or 8 during the week feels pretty shitty. I’m going to continue at around 80 per week, but am going to try to focus my weekday workouts a little more in an effort to breathe some life back into my legs. I also need to start getting some speed work in, more out of curiosity than anything of where I’m at as far as running Boston. I paced some kiddos last weekend at the Students-Run-LA 18 miler (in prep to run the LA Marathon – yep, 2,000+ kids running 26.2 miles! So cool and inspiring!) and though my group was an easy 8:30-9 min/mile pace – my quads were pretty rocked from 2 ½ hours of pounding on the roads. My plan is to start getting a 10-15 mile tempo run in on the roads during the week, so as not to sacrifice any mountain time (fun time!) on the weekends. After conferring with “coach,” the thought is that if I can keep up the work, training through C2M and then kick it up to 100 mile+ weeks with at least 20k of climbing (I’m averaging about 13k now, so not too far off), I should be in good shape for giving AC a solid effort. In the meantime, I shall remember this mantra, courtesy of JDF:

Now, enough with the seriousness. Look at how much fun I am having….. 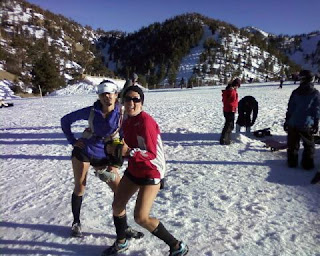 June & I at the notch - getting our elevation on. (June's running States this year!) 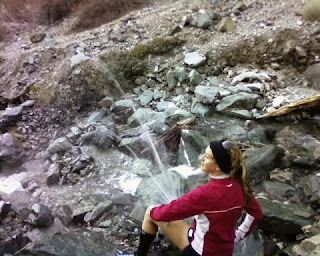 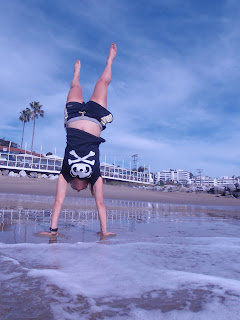 Some days, you've got to do handstands and eat ice cream sandwiches at the beach. 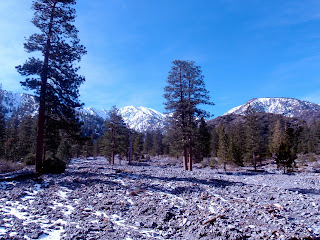 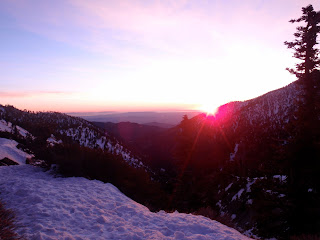 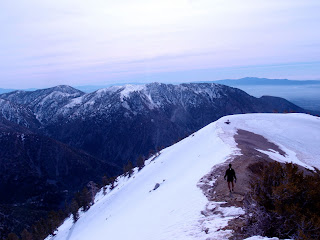