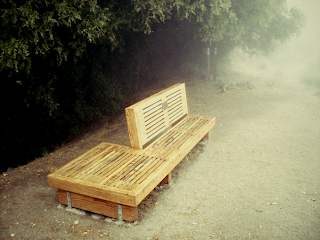 I wiped the sweat from my brow as I reached the final switchback.  A minute more and I had reached the clearing, 5.5 miles and 3500’ from the place I’d started, but still a long way from where I wanted to be.

I walked over to the bench to sit for a moment.  It was a brilliant, sunny afternoon here on the last day of summer in Southern California – the kind of day that makes you so happy to just be here, that I decided I’d do just that.  Just be here for a few more moments.  I fought back the tears once… twice… and then it was no use.

It had been exactly seven weeks, and oh, say, 12 hours since I’d been here last.  It was dark then, and the city lights twinkled below.  Like today, it had been quiet and still, and a soft breeze might blow every now and again.  It had been a point of coming to a certain peace and understanding about what was to come.  But unfortunately, that was not an understanding I was too thrilled to receive.

On that evening, I had pulled myself up and continued on the trail to the toll road and then down to the mile 85 aid station of the Angeles Crest 100, where I’d drop from the race.  Drop, as in, not finish.  I’d done everything I could in preparation for that day, and was more confident in myself and my training than ever before.  But looking back, regardless of the circumstances that eventually brought about the DNF, did I really believe in myself?  Well… I don’t know.  But I do know that confidence is not belief.  Belief is a whole other animal.

I’ve been thinking a lot about the concept of believing, largely due to a beer-fueled conversation I had with the winner of said Angeles Crest 100 and new women’s course record holder, Angela Shartel.  She told me definitively that the real difference between past races and this now present “race of her life” was not her training, preparation, nutrition, insert any idea you may have here.  It was simply the fact that for the first time in her life, she really believed she could do it.

Naturally, I’ve been doing a lot of soul searching in the past month plus since the race, and have considered this theme often.  DO I BELIEVE IN MYSELF?  Do I believe I can do a certain thing?  Specifically, right now, do I believe that I can run 24-26 hours at The Bear 100 this Friday, as I’ve arbitrarily stated is my goal.  Well, if I could run up that climb just now and it felt easy – that’s all I’ll have to do repetitively for the duration of the 100 mile course.  That seems reasonable, so yes, I think I can do it.

BUT DO YOU BELIEVE?

Well, I had a really good base going into AC, I recovered well, and I’ve put in some 10-11 hour days in the Sierras.  My mileage hasn’t been as high as my 100-130 mile weeks for AC, but I’ve been running by feel and think I’m in decent shape.  I’m not injured, so I’ve got that going for me, I’ve been just fine at higher altitudes than Bear will be at, and holy shit this is my exact problem.

The only way I’m going to believe in myself is if I have proof.

There, on the Bench of Understanding, I received my second and final dose of clarity for the summer of 2013.  I didn’t truly believe in myself, because I needed proof to do that.  And how can you have proof of something you haven’t yet experienced?  My perfect race, my defining moment was my Santa Claus.

Mind you, I stopped believing in Santa when I was in kindergarten.  KINDERGARTEN.  Jenni Dawson said her mom told her he didn’t exist and that was all that I needed to hear.  There would be no convincing by my heartbroken parents – it was all too plausible to my feeble mind that they did really love me enough to by me all those presents.  If they bought a house and a car, they could certainly buy me a Nintendo.

Likewise, there are way too many things that could go wrong and way too many better runners to ever allow me to be the fastest or first.  Just as I needed to see Santa’s jolly ass in my fireplace to believe he really delivered a sleigh full of presents to the entire world in one night; I’ve been searching for that thing that will prove I can run at a level to which I am satisfied.  Only problem is, that “thing” isn’t really as tangible as a fat man in red in my living room.  And the “level to which I am satisfied” isn’t a question of existence.  It’s more of a general feeling of worth and contentment.

Ahhh, we’re talking about greater themes here then, aren’t we?  Perhaps this was less like elves and the Easter Bunny and a hell of a lot more serious.  How do we have faith in each other in our daily relationships?  How do we believe in our gods?  I can KNOW how I was created and born, because I have scientific evidence.  Proof.  Therefore I am fully confident I arrived via uterus rather than a stork, in the same way I am confident I am physically able to run 100 miles in the mountains based on the concrete facts of the work I have put in.  But to believe in my ability to perform at my very best, to transcend both the physical and mental that will allow me to truly reach that sort of runner’s nirvana, well that’s like believing in a god I’ve never seen.  Sometimes there is no proof.  And that’s exactly why belief creates so much power.

By that token, maybe it has to be a truly meaningful and worthwhile thing to develop any belief in it.  For me, maybe time is just too arbitrary of a thing – maybe what stirs me deep down in my core isn’t a specific time, record or win.  In fact, I know it’s not.

So if it is not running 24-26 hours at The Bear this weekend, then what is it?  What is it that I truly WANT out of all this madness?  Upon closer examination, I’m realizing that all a 23:59:59 would bring me is more proof of something greater. So I peer closer.  All things considered and all weakness bared, I think the one thing that is honestly holding me back from the ability to run the race I want is a lack of ability to effectively manage the pain.  Sure, most would argue that I have a pretty high threshold based on some past events like, oh say, running 100 miles with a yucca spike in my knee.  But this is beyond that sort of physicality.  I’m talking about that kind of pain that ultimately shakes you to your core and makes you question everything.  The kind that can only come somewhere between mile 80-90 in a 100 mile ultramarathon. I don’t want to just survive that pain anymore.  I need to welcome it and happily bring more of it.

And what would that bring me?  Ultimately, strength.  True transcendence of the mind and body.  My religion.  My faith.  My connection with the world.  The same things most anyone else is looking for, really.   It’s just that I’ve never gone far enough over the edge to really, honestly have to believe I am strong enough to survive.  Perhaps we are all willing to go to a certain level to accept an un-provable truth.  And I guess I'm just one of those people who most often has to take things a little too far.

For a person like me, it would seem that true “belief” comes only when there is no other option.  When you have to do a certain thing so much that it becomes inconceivable that you will not.  And maybe THAT’S why I’m going to Utah on Friday.  To test my soul to the point where my only option is to believe.