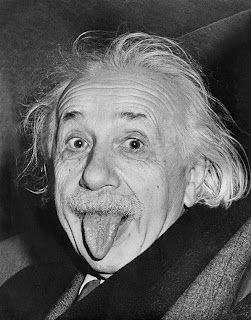 And now here I stood on the starting line of the district meet, in what should have been one more easy step towards the championships. I had one of the fastest 800m times in the state and could finally get my shot at being declared “the best”. And through the first lap, all was going according to plan. I tucked behind the leaders, staying nice and relaxed, and as we leaned into the first turn I prepared to make my attack. I would open my stride down the backstretch and pull into the lead, then run as hard as I could until I crossed the line and either threw up or was entirely convinced that I would. This nearly always worked.

But today, something different happened. The girl in front of me slowed sharply, as the one behind me surged into the turn.* The latter stepped on my heel as the former became a perfect blockade from my clear path. In an instant, I was sliding. Then rolling. Then face planted into the track. I scrambled up to see the pack of four begin blistering down the backstretch and set the panicked chase in motion. I caught one by the last turn… a second as we came out of it. Now I just had to catch one more or my season would be over.

*Who does that anyway?

After the race, I didn’t throw up. Instead I kicked a bench. I punched the ground. I collapsed into a sobbing heap of disbelief. I really thought my life was over. Accordingly, my dad pulled me out of the stadium to save me from further embarrassing myself and my teammates and attempt to set me straight. His words were stern, but poignant.

This race, this title was important to me – but relative to the grand scheme of things, who really cares? Did I really think that people would talk about my “failure” for years to come, relative to my overall competence as a runner? (Admittedly, at the time I did.) Was it fair to deem myself a failure in the wake of four years of championships and titles, relative to teammates who would have killed to just once feel the joy of snapping the tape? Was this the last chance I had to be “the best,” relative to the long life ahead of me as opposed to the mere 18 years behind me. Furthermore, was “the best” at the Missouri State High School Track and Field Championships really “the best” relative to national championships, world championships… I don’t know, universe championships?

The simple answer is no. But unfortunately I did not yet understand this theory of relativity my wise father had shared with me. (He’s an accountable engineer. I make shit up for a living.) So I did what any other hyper-competitive, self-loathing teenager would do. I quit running forever. 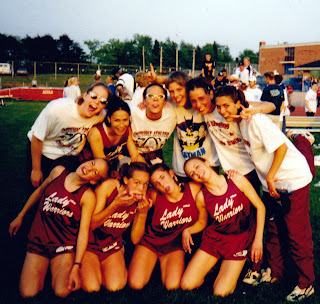 St. Charles West High School Track Team - circa 1998. Clearly, I was all business.

Fortunately, forever was also a relative term, and after a few years I began to pick up casually running (NOT RACING) again. I ran a few marathons, since I thought I would suck at it - thereby removing the competitive factor, and when I moved to California back in 2005, fell in love with running the trails of the Santa Monica mountains. The first trail I ever ran was a 4.5 mile loop known as Temescal. I use the term “ran” very loosely, as what I was really doing could be best described as a 1 mile jog and then painful death hike to climb the remaining 700 feet in a mile to the “top”. I continued to run this loop over the next couple years, and while I could run more of it than the first time, there was always hiking involved. I began to wonder if maybe someday I could run the whole thing, though I couldn’t imagine it. 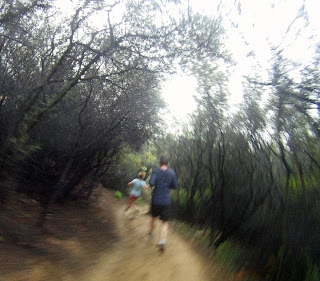 Flying down the once elusive beast, ye Temescal

I don’t remember the day, the exact date or the circumstances of the morning I ran every step to the top, but I remember the feeling. I remember making it past the left hand turn over the metal drainage thingee and not stopping. I remember the realization that if I just held out a little longer, I was going to do something that I was reasonably sure was impossible for me.

Not too long after, I was introduced to the San Gabriel mountains – the big girl mountains – which dwarfed the Santa Monicas in comparison. Roughly two years ago, I went for my first run out of Chantry Flats and it reduced me to tears. Climbing the 3,100 feet in 6.24 miles on Upper Winter Creek to the toll road was no joke, and it didn’t just slow me down. It broke me. I went back to Chantry many times that year, and every time it was hard. Every time I hiked. A few times I cried. 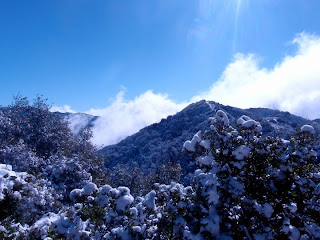 Snow covered UWC on a beautiful day that will be the exact opposite of July 23rd.

After over a year away from my elusive Upper Winter Creek, I unknowingly ceremoniously embarked on a loop up to Mt. Wilson and down Sturdevant on new years day. I immediately noticed that it was not as hard as I remembered… but still hard. And eventually, I still had to hike a few short times when things got really steep. But still, I began to wonder if someday I might be able to run all the way up to the toll road without stopping. And there it was:

Chantry was my new Temescal.

Over two months of very productive and smart training flew by, with all my runs out of Chantry taking me backwards on the course to work on the descent from Newcomb’s. The staples became the 4600 foot, 10 mile relentless yet 100% runnable climb up to Mt. Wilson out of Eaton Canyon, and adventures up Baldy Road and beyond for icy, snowy slogs above 8,000 feet in the backcountry. I finished my weekends wholly exhausted but satisfied with the climbing. I knew I was getting better – I could feel it – but relatively I had nothing to compare myself to. Until last weekend. 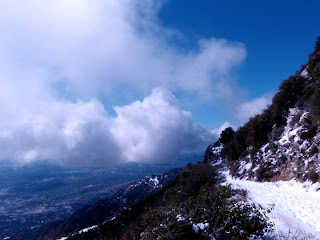 Heading down to Eaton Canyon after the standard 4600' climb. 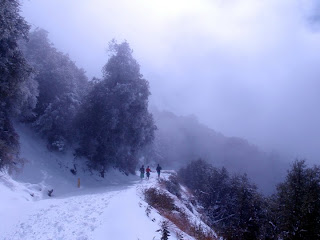 Heading down the toll road after another Wilson summit.

After a 7k+ 22 mile day running up the ski slopes of Baldy, we camped at Manker and then headed to Chantry Flats. Dom came down with a fever, but insisted that I get my training in as I felt perfectly fine. So I headed up Upper Winter Creek, fully resolved to just see how I felt and possibly turn around at the toll road if the day wasn’t particularly great. It was a pretty perfect day, the sun shining brightly and me comfortably running in nothing but shorts and a bra top. I ran relaxed for the first two miles until I reached the split, where I knew things would get a great deal steeper. But a mile later, I suddenly realized I hadn’t yet needed to hike. I didn’t feel like I was pushing, yet I was still running further than I had before. Interesting…. That’s when the first thought crept in:

Maybe I can make it to the bench. 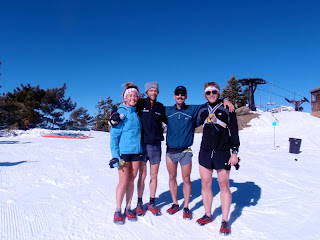 Owning the slopes on Saturday, sans board, plus microspikes

I hit the bench, and with only a half mile or so to the toll road, I knew what I had to do. Run every step of Winter Creek. I actually couldn’t believe how great I felt. Sure, I had to push in a few really steep sections, but I was once again, about to do something I had once thought was impossible for me. Compared to Temescal, this run was over 4 times as long with 4 times as much climbing and some magical math percentage that equals “way harder”. When I eventually popped out at the toll road, I was overcome with happiness, but it still wasn’t enough.

Fuck it. We’re going all the way to the top. 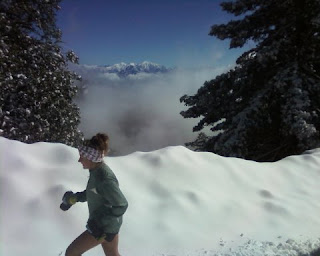 The fireroad from the UWC split up to Wilson; Mt. Baldy in the background saying, "Climb me too! I'm more legit!"

It was only 1 ¾ miles to the peak of Mt. Wilson, including a mile of gradual fire road to let my legs recoop from Upper Winter Creek before blasting them with a final ¾ mile of rocky switchbacks. I knew I could do it. I knew that I needed to do this. And so I did.

Blazing back down the mountain via Sturdevant, I meditated for awhile on the significance of conquering my new Temescal. And though this 17 mile route was much different than the 4, the effect was the same. I felt forward momentum. I felt progress. I felt my work coming to fruition. So many times in my running and my life, I allow myself to be consumed by the frustration of “why can’t I do this right now?” I compare myself to others and refuse to see that their circumstances are different than mine. I forget to content myself with “soon” rather than “now.”

I feel like this has been the lesson my dad has been trying to teach me all along. It all comes down to the same thing, and now I understand. It IS all relative. When I am impatient, it is not lack of patience. When I am unhappy with myself, it’s not the inability to be happy. It’s all the blindness I’ve had to accepting things as they are, relative to me - my life, my abilities, my choices, my experiences, my circumstances, my everything. The only real problem would be if I was unsatisfied with my world and my work. But I’m not.

The other engineer in my life recently asked me a similar question:

Do you want to be really fast or are you in it to endure the long one?

All I had to do was take a look at the last few years of my life and my relative progress to determine the answer. Yes. I am definitely in it for the long run. Now there is only one question that remains: 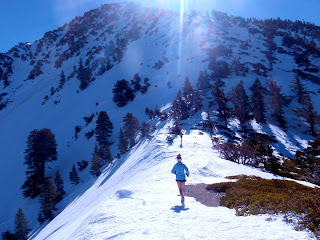 Relativity: I used to hike all the ups. Now it's easier to run every step. 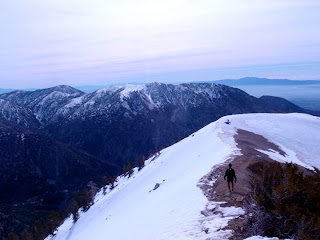 Relativity: 2 years ago, a mountain 50k was a huge race to prepare for - the longest I'd ever run. Now it's a standard training run. 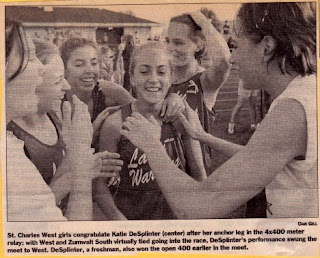