With math, subjectivity is checked at the door and all that’s left are the cold-hard provable facts. The numbers never lie.

Sounds weird coming from someone whose entire professional life is centered around thoughts, opinions and creativity and whose repertoire of buzz-words include gems like insights and ideation. But I digress, this simply isn’t about work and ideas. It’s about running and the facts. However, just as I can apply logic to a creative profession (let’s be honest, at the end of the day, it’s not about the “best” idea; it’s about “who” is highest on the food chain and bowing to their opinion), I can also allow subjectivity to creep into my training. I begin to form opinions on what I am and am not capable of.

Allow me to elaborate a little on where my head is at right about now. Two weeks ago, I was basically amped. I’d been putting in solid training weeks all year and I felt great. I was completing super challenging runs with little to no trouble, climbing 5-7k back-to-back, at elevation every weekend and even ran every step from Chantry to Mt. Wilson for the first time ever (after a 22 mile day with 7k of ups). I saw progress. I felt amazing. And while I hadn’t yet swiped my Visa with the optometrist, these new rose-colored glasses were pretty much the shit. 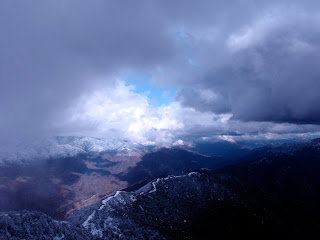 Living and loving life 10 mi above the city.

Then came the sickness. The devil filled my lungs with nastiness and tried to break me with a fever twice. I kept training, but my mileage was low and I felt terrible. The low point was probably last Saturday when a fever had me soaked in sweat and dizzy only 2 miles out of Eaton, resulting in me only running four miles and then becoming disoriented in the middle of a RiteAid. I now own pillow pets and a yellow notebook.

Last week was sluggish and hard and I looked forward to 0 runs, but was optimistic heading into the weekend, even though the weather reports called for freezing temps, hail and snow levels down to 500 feet. This forecast didn’t entirely disappoint, which is how I found myself with numb extremities on the top of Mt. Wilson Saturday afternoon. The run/freeze/snow slog pretty much destroyed me and I spent much of my night writhing about the floor like a fish out of water. A fish in pain. Sunday morning, as we arrived back at Eaton (since Chantry was closed due to a landslide) I welled up with tears. There was not one part of me that wanted to get out there and run up a 4600 foot mountain. I wanted to curl up with the pillow pets in the back seat and sleep the day away. Only, not really… 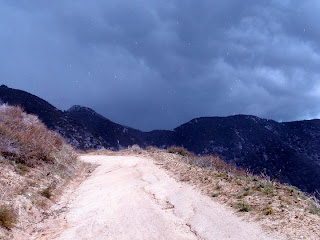 Climbing into a snowstorm in the sun.

You see, I was completely present to the fact that I was not injured. I was no longer sick. I was just really, really freaking tired and arguably a little beat down – but that was no excuse not to run. This was my moment to either give in where most would justify that they should, or to go out fighting and climb another mountain. It was here that I would decide if I was serious about my AC goals or if I was just talking a mean game. Because let’s be honest, it’s easy to train hard when you feel great and are high out of your mind on life. But it’s training hard through the times of greatest mental and physical fatigue that define the truly committed.

The interesting thing though, was as I started my run,* I wasn’t sure I really wanted to be that person. Did I really want to allow running to start ruling a larger majority of my life? Did I want to be that athlete who ran even when it wasn’t fun anymore? Furthermore, was there even a point for me? Why was I completely breaking down over a weekend that was hard, no doubt, but nothing compared to what the top runners in this sport do to achieve their goals? Maybe it just isn’t in the cards for me. Maybe no matter how hard I work, I just don’t have the talent. Maybe I’m just not cut out for running a mountain 100.

That is reality. But what I quickly came to grips with was that the possibility of coming up short was not going to stop me from trying. I blew past my first planned turnaround point and continued up, up, up. My legs felt like I was at mile 60, which I was beginning to view as a good thing. Simulation. As I reached the turnoff to Idlehour, I thought, why not use this as an opportunity to pretend I’m at mile 84? Let’s go climb this godforsaken shit.

The canyon was pretty much wrecked from the storms we’ve had over the past few weeks, and I spent an unfortunate amount of time climbing over, through and around downed trees and shimmying/dancing across the creek turned raging river crossings at the bottom. I hit deep-ish snow about a mile up the climb/2 miles from Sam Merrill and shuddered at the thought of the numbing experience atop Wilson the day before. But I had a better jacket today and I felt fine as I continued climbing to my turnaround point. I was now officially on autopilot, and I think I even smiled a couple times. Hell, I was actually starting to enjoy this.

Heading back into Idlehour, I knew I had one more climb and then I’d just have to suffer through a quad-busting decent. But then I’d be done and would have completed 22 miles on a day I thought I’d only make it 7… if that. Pretty motivating. Actually, it was motivating enough to keep me running the whole 2,000 feet in 3 mi climb – a simple act that had me shocked at myself about a quarter from the top. Even though I was going through a rough spot in my training, I hadn’t completely broken myself. In short, I was proving that this type of mileage – more specifically the amount of climbing I was doing was sustainable. 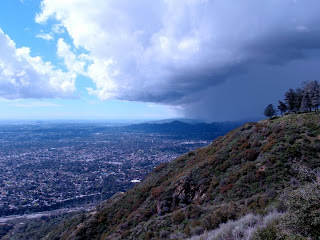 Wilson Toll Rd out of Eaton - another crazy storm a brewin' in the distance.

OK, now I was officially running happy. (Er… I mean loyal to the sport.) I blew back through Henninger and down the steep descent to Eaton, singing and flying. Two of my favorite things. Within a mile from the car, Dom caught up with me, running back out to see where the girl who didn’t think she could run today had gone. He reminded me again of my declared interest: persistence over time. For me, this process is not about being fast for a quick moment. It’s about being consistent and strong for the long haul. Powering through the climb at mile 83.75, as I did at mile 9.3. And for that, days exactly like this were necessary.

Days where 24 hours later, while doing the math on my lunch break, I realized I had still put in a completely solid effort even though I felt weak and crappy. Despite wrecked legs, a few pee breaks, lots of climbing around trees and streams, snow, and an arguably bad attitude, I had still run the Idlehour section a few minutes under the women’s CR pace. No matter how down on myself I wanted to be, those numbers were bitch slapping me back to reality. Because while a person can lie to me to make me feel better, math can not. And math was saying I had done alright.

I decided to take my first day completely off of running all year on Monday. I needed to let both my mind and body reset, and most importantly, have a moment to understand what was about to happen. I was now very clear that I was very serious about my goal, and what that means to me is this:

It's a fine line between breaking down and breaking apart. I’ll continue to run that line until I break through. 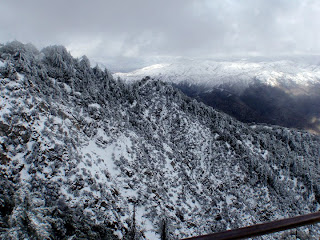 When I say that I have a mountain to climb, it's always both metaphorical and physical. On this day, my mountain was ominous as hell.

February was a short month, both literally and mathematically. I was sick for the second half and as much as I tried not to let it affect my training, it obviously did. Both my mileage and climbing were lower than I’d have liked, but I’m accepting it for what it is, and am actually happy that I ended with a solid weekend of ascent. In short, I think February was entirely necessary to move me along mentally and responsibly in my training. Here are the incredibly loyal, honest as hell numbers:

Heading into March, I need to be as honest with myself as the math is:

1. While my weekends have been awesome, I am not being consistent enough during the week. I think I’d be better to be running at least 40 miles M-F, and right now I tend to only run 25-30.

2. I also need to focus on core work. I’ve been doing a bit of ballet in my living room, but to be honest, I haven’t done a crunch in ages. I’m planning on rocking my free week at a hot yoga place the week after C2M (so I have time to get my no-money’s worth) which also offers ballet and core classes in a heated room. If I like it, I plan to invest and hope it will help take care of this area of my training that is lacking.

Moving right along, I’ll keep the mileage consistent with nothing too crazy leading up to the C2M 100k fun run mid-month. The plan is to follow the “race” with a three week build and then one week taper for Boston, where I will see how fast I can run a road marathon off of purely mountain 100 training. I like experiments.

FINALLY, seeing that the theme of February seemed to be Wilson ascents, here are some classics from some amazing days with amazing friends... 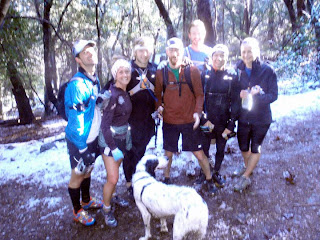 Running a snow-covered UWC, a week after charging up in the heat. Southern California is weird. 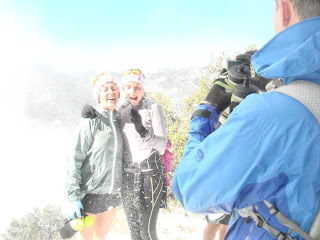 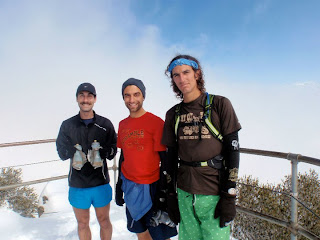 Our favorite brothers from Arizona join us on a truly epic day. 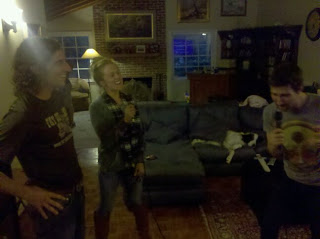 Wilson summits are best followed by whiskey and kareoke. Fact. 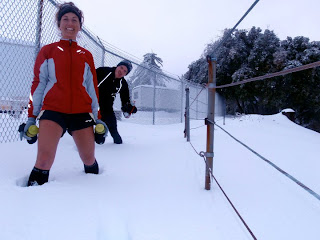 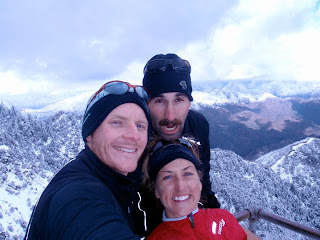