Running 50 Miles to look at a Bridge

Well. THAT was unexpected.
See, the thing I love about taking on these new challenges and unchartered distances is simply this: I don't know what the hell is going to happen. Therefore, I rarely look at a watch and go in with a goal of finishing. That's it. When my body says 'feed me,' I eat. When my quads say 'break, please,' I hike backwards. When my IT's say, 'stop charging the downhills, dammit,' I continue charging the downhills.
IT bands are stupid.
My first 50 mile adventure was no exception. My plan was to start conservatively and basically just do what I could. I put in a lot of work this summer, but had been plagued by some achilles and compensation issues that crept up during the three weeks where I went insane and initiated a training plan consisting of angry running 80-100+ miles a week. That was fun. Apparently it also turned me into a certifiable badass because I fucking KILLED it at Headlands. Here's how it all went down...
After a week of no sleep and working 14 hours a day, my good friend Katelyn and her Subaru showed up at 6 AM Friday morning. I only agreed to leave so early because Katelyn promised we could stop for chocolate chip pancakes for breakfast after we were out of LA and safe from traffic. We did and I fell in love with the waitress at IHOP when she let me make up my own meal consisting of nothing on the menu AND then only charged me $5. Oh yes... this is going to be a most excellent trip.
The rest of Friday consisted of driving on the 5, relaxing, perfecting the creation of pineapple pizza and people staring at my awesome new Vibram Five Fingers shoe-type items. Then I packed drop bags with everything I could ever need since I had no clue what I was doing. It was a hot mess... 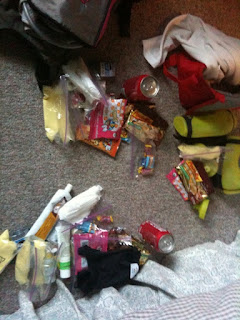 Out of all this, I used: 1 powerbar, the body glide, the golden sunshine, 1 bag of gatorade endurance and a kleenex... which is ironic because my drop bags could have legitimately been their own aid station. For the entire race.
I slept like a champ and the morning of the race I was the most calm person ever. And I don't think anyone would necessarily define my demeanor as any derivative of the word 'calm.' I guess I had just come to terms with the fact that I was going to be spending my entire day running in some mountains and that seemed pretty alright by me. So we strolled up to the line and honestly, I don't even remember if there was a gun or a whistle or a "Go!" - all the sudden it was just time to run.
So I ran. 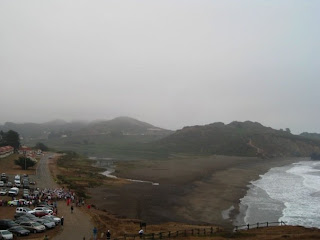 The start @ Rodeo Beach - I'm told this picture was taken from roughly 1/6 of the way up the initial climb. Now that you have a better understanding of the ridiculousness, read on...
Now the thing about Headlands is that it is NOT an easy course by any means. (Have a little gander at this if you will.) Accordingly, we began our day with a nice little thousand foot climb in the course of about a mile and a half. It. Was. Steep. I alternated running and walking to try and loosen up my screaming achilles, but they were not a fan of the hill and decided to just be annoying instead. That sucked, so I just focused on how epic the scenery was: cascading waterfalls of fog... runners vanishing into the mist... it was some live action motivational poster shit for sure. 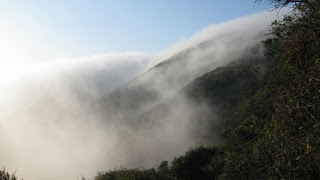 I stole these from people off of Facebook... some of which I don't actually know. Moral of the story: if this is your picture and this also happens to be illegal; let's chat.
I told myself not to run too fast when I hit the downhill, but let's get one thing straight: I am a downhill runner. Haha, you say, everyone can run down a hill, silly! But not everyone can run down a hill like me and that's a fact. Downhill running is my jam. Therefore, I could not help myself and upon a post-race Garmin check discovered I was clocking 6:20 - 7:20 pace on this section. Good idea? Bad idea? Survey says: MOST AWESOME idea.
The race continued in this fashion: running/hiking up the hills; charging the downhills like it was my job. The cool thing about starting with the 100 milers was that I got to run with a lot of really talented dudes, since they backed off their pace for twice the distance. The other cool thing was that since the loop course was set up less like a circle and more like something I would liken to Nickelodeon Gak, I was close enough to the leaders to cross paths in and out of the aid stations. It was in this way that I realized that there were only a couple women ahead of me. That can't be right, I thought. I am just this dumb kid out here running 50 miles for the fun of it. I simply cannot be doing this well.
Well... I was. I waited to feel the burn at mile 17, and that didn't happen. Pretty soon, I was cresting the final peak of the 25 mile loop and heading back down to Rodeo Beach. I could see a final mile of decent and then a nice easy grade half mile or so cruise into the main aid station. Except for the fact that said "easy grade" was made of deep, soft pebbly sand. As if running 50 miles up and down giant mountains isn't hard enough... let's go ahead and throw a fucking sand trap in there. Just to mix things up. God, I love this sport.
I had originally planned on switching to my Nathan hydration pack at this point - but my arms felt surprisingly OK. Guess it was all the man push-ups courtesy of Coach Jimmy. By this point, I realized how well I was doing and was micromanaging the aid stations, refusing to spend more than 2 minutes in each. I had already been here 4 with the addition of my one and only bathroom break, so it was time to move. Now, the best thing about the aforementioned sand section is that I got to do it again! Uphill this time! I passed one of the only women ahead of me, due to a matter of differing opinions: I consider sand runnable. THEN I realized I had just run a marathon in 4:45 and again, was very confused. I honestly believed that Mr. Garmin had stopped working at some point and then magically started working again.
Either way, at this point - I decided that conservative Katie was over with. I had run nearly 30 miles and should be feeling a lot worse. So I started running up most of the climbs; during one of which I ran into Katelyn! She confirmed that Mr. Garmin was not, in fact, a dirty liar and that I really was running like a mad woman. This picture is bizarre, because I have run 29 miles at this point and don't look like I've done shit except ate a donut... 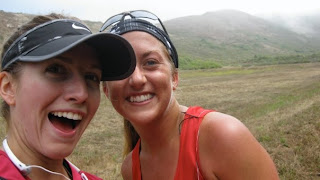 Oh weird. I am in a valley after running down a big ass hill and getting ready to run up another big ass hill. Welcome to the Headlands course... 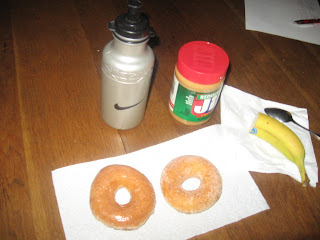 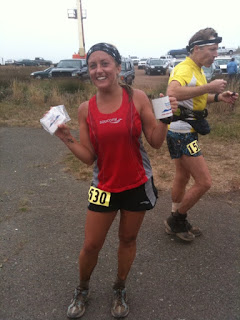 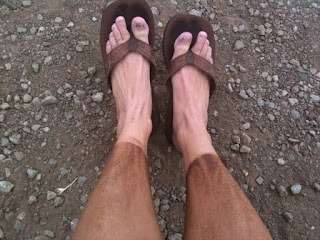 Awesome line from my DeSplinjinjis. (Credit goes to Peter B for that one.) 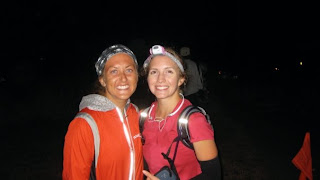 The lesson to take away from this happy photo is concerning the effects of micromanaging aid stations: Katelyn reapplied sunscreen. Katie did not. Katie is now eligible for certain scholarships and grants made possible by affirmative action.
After the race, I hung around the finish for about 4.5 hours so that I could see Katelyn finish her first 50 mile race. I was in such a damn fine mood that I took it upon myself to be everyone's personal cheerleader and high-fiver. I drank 3 Cokes, ice bathed it up in the Pacific, called all my BFFs who ran Mt. Dis and had awesome days as well and watched a beautiful sunset over the Headlands. My dear Katelyn eventually emerged out of the darkness with a headlamp and a smile. It was just like finishing the race again! Then we drove around for an hour and a half trying to find Tennessee Valley and my missing drop bag. Then I went back to the house and tried to shower through chaffing so extreme that it has scarred my legs for life. Then I sat on a kitchen floor and ate about 12 mini oranges.
Throwing up citrus fruit at 4 am is both fun and burns.
VITALS:
50 miles (holla!)
10,010 ascent/descent
10:11:28 - 12:12 average
Fastest pace - 6:20
1st Female 1-29
5th Chick Overall
Mr. Garmin's Etch-a-Sketch:

Check out Katelyn's Video Blog HERE.
Check out Headlands Results HERE.
The Word:
Once again, I went out extremely conservatively and know that in the future I am strong enough to run more of the initial climbs. No regrets though - it was a brilliant race and I am still in shock that I ran so well. I realistically expected this course, with this kind of climbing to take me 12 hours at the very least. It did not. Also, yes - I am currently drinking out of the coffee mug.
Posted by katie at 2:35 PM