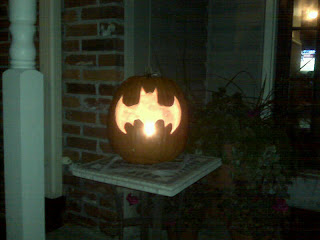 The bat signal was on back in St. Louie. My parents are the bomb.

How ya doin’ Batgirl?

I’m not going to lie, I’m freaking out man.

As you can see, I admittedly broke down a bit when I got back to my crew. I didn’t know what I wanted or needed, and didn’t want what they were trying to give me. Salt, Gatorade, GU, Body Glide. Just keep me on the basics, please. Jimmy tried to give me a slice of pizza.

I’M NOT EATING THAT SHIT!

The best news ever came in the form of Julie Jacobs putting on a camelbak and stepping up to the plate.* Yesssssss. I get a pacer. My mood improved instantly and I was ready to head back out in that godforsaken desert for another 15.5 miles. Seacrest, out.

OK, I don’t know what numbers are anymore so I need you to tell me everytime it’s been 45 minutes. Is that okay?

…I’ll ask you if I forget what that means.

And with that, we set off to loop it up clockwise. Again. At this point, I knew I was doing really well, but I was starting to feel some serious pain. Nothing distinguishable… just total body fatigue, which I had decided was no big deal. For my coping mechanism, I decided to hit the tunes in one ear and initiate a desert sing-a-long. The only participant being me. Julie and I talked intermittently about stuff – mainly her answering all my questions about what was going on back at the main aid station (code: drama) and my philosophies on how I had physically and mentally progressed as a person since my last relationship (code: I’m losing my mind). It was about this time when I became really concerned with everyone else’s race as well – I knew how bad this thing was kicking my ass and I wondered how everyone else was dealing with it. 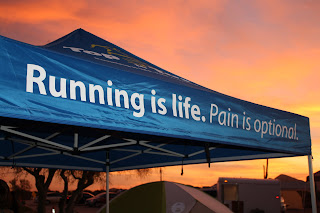 Optional? More like unavoidable. I came up with this back when I was just running marathons.

Unfortunately – I got my answer at Coyote Camp. Bev was sitting under the tent with Kate – her face blotchy and tear stained and a faraway look in her eyes. She smiled, but I was not fooled. Kate was in a world of hurt and it killed me that there was nothing I could do about it. And I accepted that this pain would find me too and again, there would be nothing anyone could do about it. Nevertheless, I did what I could – I tried to show Kate my ass while peeing on a cactus, but that didn’t work. Ah well, it was time for me to be moving on.

For the rest of the loop I pretty much just sang at the top of my lungs in random breathy outbursts, sometimes involving air-drumming or air-guitar hero. Not regular guitar. I only know the chords on Guitar Hero. Poor Julie. All marbles had been lost, the rocker had long since been left - I had officially run myself retarded. As we hit the descents I was all but screaming lines from The Fray (this is becoming a theme) and hammering down the closest thing to technical single track I could find. I even dropped my pacer a couple times with my reckless, headlamp-less downhill charging. Poor, poor Julie.

I was still cruising along, when I began to get the distinct impression that something else was cruising along next to me. Wait a minute, that’s not Julie. That’s a horse!

Actually it was four horses – one majestic white guy, two brown coats and one spotted fellow and they decided to pace me for a bit. OK, stop. Picture this scene for a minute:

A dark night lit only by the full moon. One wild spirit running with four wild mustangs through the eerily quiet desert. And if you were wondering, yes the white one definitely looked like a ghost. Whoa.

Uh, Julie, are those real?

Yes Katie, they are real.

I continued to push it down the long, gradual downhill – stopping at Jackass Junction to get the remaining GU out of my drop bag. I realized at this point that meant I was going to consume over 30 packets of this shit in one day. My intestines are clearly glued together at this point. They have to be.

A couple miles outside of the Jeadquarters I decided that I would ask Julie how long this loop had taken me. I was deathly certain I had been shuffling along at a very slow pace and that this loop had taken me close to 5 hours. I prefaced by telling her that I knew the time didn’t matter and it wasn’t going to change anything… I just wanted to know.