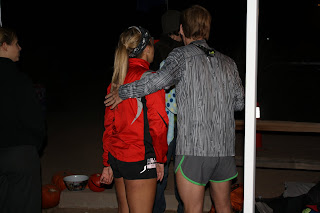 This picture is actually from the last lap, but reiterates two points here nicely: 1. Ultra Birney is in for a real treat; and 2. WHY THE HELL DIDN'T I GRAB THAT JACKET??? Look at how nice and worm it looks!

I was very excited to see Peter Birney. Long ago, I had put him in charge of my health and well-being; a job that he did not take lightly. He was ON it every time I came through the Jeadquarters - I was in and out like a high school prom date. And most importantly, when I was flitting about like a frantic cocaine addict he stopped me, made me look at him square in the eye and offered the simplest but most heartfelt words: You are doing SO well!

Now, however… now old Peter’s job description was about to change. Giddyup.

As per usual, I felt like crap coming out of the aid station. Even stopping for just a few minutes made it so freaking difficult to find my shuffle and keep running. Ouch and double ouch. However, I had been informed back at camp that my boys P-Dubs and Guillaume had dropped and that made me even more determined to finish the race for them too. Actually, at this point I had yet to have any moment where I doubted my ability to complete a full 101.4 miles. And I had yet to encounter any thoughts of just not wanting to do it anymore. At 77 miles, that was a good sign.

However…. I was fighting a major meltdown. Luckily, Ultra Birney kept me moving uphill, kept me entertained and helped me to discover that the “snakes” I had been jumping over for 20 miles were simply the course markers blowing in the wind. Cool. We sang old songs – Billy Joel, lots of Journey in people's faces and just the choruses to some Foreigner stuff, since no one actually knows any of their songs in their entirety. When I went silent, Peter sang me old negro tunes and that was both nice and ironic. He asked me if I wanted to know what place I was in, but I told him I didn’t care. It didn’t matter.

When we came into Jackass Junction that major meltdown I referenced came on full force. I was just staring at the food sobbing. Mind you, I had NO IDEA why I was crying. My body was freaking jacked. Luckily I got mad because all these people kept thinking I was someone else and then when I wasn’t that person they became extremely disinterested in helping me. So I just left.

Soon after, we hit the rolling section and I started running again. Up and down and up and down. Just keep moving. Relentless.

Largely to curb my excessive moaning and groaning in pain, we recited FU Penguin quotes and that kept me entertained for awhile. YOU CAN’T EVEN METAMORPHOSIZE YOUR CRAZY ASS! I had developed what I will now refer to as “ultra-turrets”. I had no control over the volume of my voice and when I had what I thought was a noteworthy thought, oftentimes I felt the need to shout it. Good lord. Peter told me I was running well and reminded me that every single person that we were passing was behind me… it did seem like a large quantity of individuals and I was very confused because I was quite certain I was the slowest person ever. 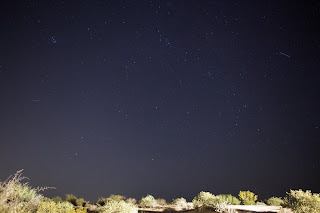 We ran into Kate via Bev and then Katelyn via Krobot - everyone was still alive and moving and I never even thought for a second anyone else would be dropping. I don’t remember coming into Coyote Camp at all, but I do remember eating a PB&J, because Peter was proud of me for consuming solid food. At this point, a quarter of a sandwich is a viable reason for a high five.

Over the next 5.5 miles, things.... well.... things began to change. The stretch from the aid station to the rocky downhill seemed MUCH longer than usual and next thing I knew I was crying. Albeit, still running. But crying. I could not control this. I understood that relatively, it would be over soon… but the thought of running 20 more miles seemed like FOREVER. To make matters worse, I couldn’t pick my feet up down the rocky section, which was exacerbated by the glare of headlamps heading back up from the zombies that were too fatigued to divert their view from straight into my face.

WHY DO THEY KEEP SHINING THEIR LIGHTS IN MY FACE, PETER???!!

Lest we forget, why do they have their headlamps on in the first place? There is a bright ass built-in lamp that is plenty of light for all. It’s called the fucking moon. Jesus. As you can imagine, our progress through the last section of the loop could best be described as “trudging.” My spirits were definitely low and apparently so was the temperature of my body. I was shaking violently and I just wanted it to be over… but first I needed a jacket, some caffeine and to run about 12 more miles. Keep going. Keep going. (This blows). Keep going.