Trick or treat, bitches! I’m back and you LOVE it! I was in excellent spirits coming back into the main checkpoint and happy to see my friends, but mostly ice. Again, I reloaded with more salt stick, more body glide, more sunscreen* and oh my god more GU. Soaked my skull head band (I'm legit.) in some cold water and man did that feel glorious. I took a moment to bend over a bit to stretch my lower back and suddenly realized how ungodly hot it was.

*another Headlands lesson. Scroll down and reference the Jamaican version of myself here. 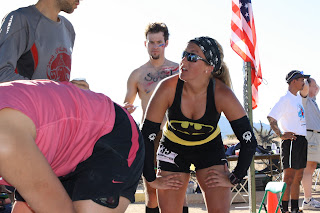 “it’s gonna get even hotter.” Thanks Jimmy. (photo cred: Mira)

Again, I hit a low point coming out of the Jeadquarters, and again I just focused on its inevitable passing and the pending sunset. Just some more hours and some more miles. Forward progress. Relentless.

I saw P-Dubs heading in to the aid station and he definitely looked worse than I was feeling. Yep... sooner or later I’d feel like that too and I knew it. We’d all have our moments on this day. There was no escaping them. Kate was in her sixties hipster loop and seeing her and Skelley really brightened my spirits. I could feel how truly excited mi Kate was for how strong I was running and I let that feed me. It’s amazing the strength that encouragement can bring… when it is genuine. That’s Kate. It fed me right into Pink Steel a mile or so later coming round the bend in her pink tutu. Everyone was all smiles – so they were either feeling great or they had me seriously fooled.

I rolled into Jackass Junction at somewhere around 10 ½ hours and guess what? I finally peed. Glory Glory Hallelujah… I’m not unknowingly dying of dehydration. I was really proud of myself for the next couple miles. 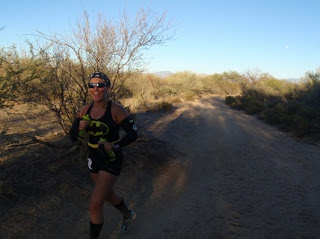 Typical shot of me at any point in the day. Apparently, I think running in a desert is fun. (photo cred: Tammy Parliment Massie)

Around mile 60 I began to feel some pain in my pinky toes – it basically felt like I was running on top of them. Also noteworthy was the fact that they felt about twice the size as normal. Bilsters, probably. Yep, definitely blisters. This made me realize that I had never switched out of my Defeet compression socks and into toe-saving injinjis as originally planned. (Which was why I wanted these). Which made me realize that I never had any Achilles issues like normal, which was why I chose to wear the compression socks in the first place. Which in turn made me realize somewhere over the last 20 miles or so my IT band just stopped hurting. Which obviously meant that the blisters too would cease to be a problem as well if I just kept running. I like this plan: run to make new things hurt so that other things stop hurting. Word.

And just like that, the painted desert sunset was upon me. I was working my way through the middle part of the course, ipod blaring some fantastic jams featuring me on back-up. The blistering heat had begun to subside and my skin happily bathed in the beautiful pink light of the setting sun. ‘Twas if my iPod knew (not that I am surprised given that it is an Apple product)… Coldplay’s “Message” strung up as I watched the light dance off the red rocks surrounding the desert floor. My mind wandered to the last time I watched the sun fade away to that very song – against the backdrop of Yosemite’s Half Dome after my first “ultra weekend.” Guys, I’m going to be honest here: I shed a few tears. First time I cried today, and it had nothing to do with pain… only joy and complete and utter happiness for where I was and the choices that led me here. Both physically, and in life in general. I thought about that first voyage into the unknown – when for no particular reason I decided to run 31 miles up in the mountains just because it was my birthday and I felt like it. I thought about my first official ultra; the roaring thunderstorm that shook the forest floor and made me feel more alive than I’ve felt in years. I remembered flying down the single track above the fog of the Marin Headlands; I remembered breaking down and sobbing in a valley in the San Gabriels. I recalled all of the places my feet had carried me this summer in preparation for this day – trekking through the historic western states course, running under waterfalls in Yosemite, momentary pauses at the top of westridge as the cardboard cutout city peeked above the watercolored clouds, headlamp-less adventures far above the sparkling lights of LA, a hot, steamy morning running along the riverbed where I grew up and first fell in love with the sport …. this is what my life is made of. Too, I remembered the injuries, the anger and the emotional ups and downs of a confusing, trying and totally necessary summer. The pain and the heartache I ran out of me. Out here in the clean and crisp air of forgiveness I was at peace with it all and I was overwhelmed with what I’d become. Somehow, I like myself better. 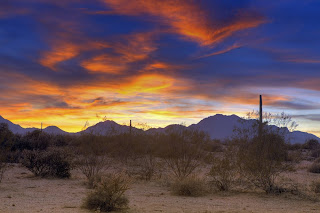 The word you are looking for is "whoa." (photo cred: Peter Birney)

I ran with my thoughts and Gwen Stefani for awhile, feeling lighter and more able than I expected at 60 some odd miles. Whatever. Let’s go with it. I began to seriously worry about Dom (nursing an ankle injury sustained the same morning I was attacked by the tiger) when I didn’t see him where I had expected…. and then didn’t see him for another 4 miles. But right as twilight set in, I saw the yellow Moeben’s cresting a hill and a smile so big it was visible from 100 meters away. A much needed hug and a renewed spark in his eye let me know that he was going to finish. I never worried about Dom again.*

*Not that I needed to in the first place - the kid is made of nails.

Low point #3 came a few miles out from the Jeadquarters. It was dark and I stumbled a bit coming down the rocky section which threw my rhythm all off. I felt remarkably good for having run 61 miles. Felt remarkably bad for still having 40 to go. I was beginning to hurt all over, I was tired and I couldn’t hold back the whimpers. I was okay, but my body was starting to retaliate. 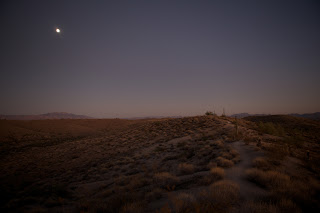 Things are about to get weird... (photo cred: Peter Birney).