Came rolling back into the Jeadquarters in a 50k PR and that instantly seemed like a bad idea. Interesante. Regardless, I reloaded on salt stick, filled my pockets with what I thought was enough GU, more body glide*, and decided to take my ipod out for a spin.

*the chaffing I experienced at Headlands was other-worldly. This will NOT happen again.

Oops, left the ipod on the table. Whatever. Time to fucking run. 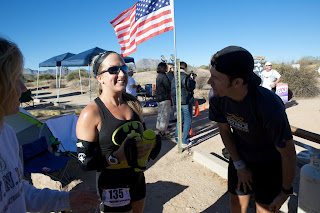 Checking in with Coach Jimmy before I go save the world. BLAMO! (photo cred: Peter Birney).

Okay, so here’s the thing about dressing as Batman for Halloween:

#1. It requires me wearing all black.

#2. On this given Halloween I happen to be running 100 miles.

#3. The location of said run is in the middle of a DESERT.

You do the math. 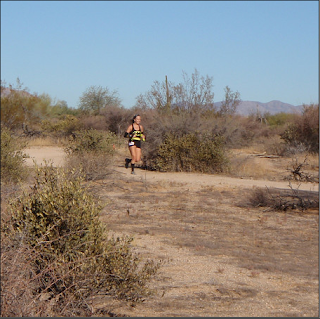 Exhibit A. (photo cred: Will LaFollette).

Needless to say, the “climb” out of the Jeadquarters was brutal in the heat. This shall henceforth be considered my first low point of the race. What this entailed exactly is me feeling pretty damn terrible no matter if I walked or ran or hiked or backwards hiked – so obviously, I just ran. The good news was that the millions ‘o GU started to taste like liquid hot magma down my throat which of course was both awesome and delicious. Like, picture taking generic cake icing – you know not the shit your grandma makes, but the slightly metallic tasting kind from Smart “n Final-type establishments – wrapping it in tin foil and then setting it out on the blacktop for the duration of a hot and steamy summer afternoon in say, Houston, Texas. Then eat it. And wash it down with hot ass Gatorade. Repeat 30 TIMES. The interesting thing here was that I was 100% positive that the feeling would pass and eventually I'd feel all special inside again. Even if that took until sunset – and sunset would be on the next loop! Remarkably, 5-6 hours really didn’t seem all that far away.

In retrospect, that makes me want to tell myself to shut up.

Be it known that the ice (per Krobot) at Coyote Camp saved me. Now the thing about ice is that I was previously unaware of its association with witchcraft and other such sorcery. Make no mistake, that shit brought me back from the dead and I don’t care what devil’s play was involved. Maybe I’m a zombie now, I don’t know…. Actually that makes a lot of sense…. Anyway, from then on out it was all about living GU to hot ass GU – aid station to aid station. Because aid station meant ice. And holy crap, I love ice. 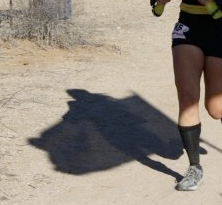